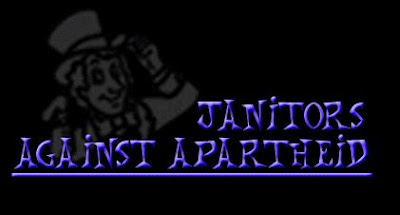 Janitors Against Apartheid were a 3rd wave ska-punk band from California and they were very prolific:

This is their first 3 demo cassettes.

I intend to post the Nerds split they did with One Eye Open at some point when I do a post on OEO.
According to JAA's Facebook they are planning a 20 year anniversary show next year.

Yeah, that's what i have waited for.Really cool stuff. I cant wait to hear the One Eye Open demos as well.Which demos have you to post?

I loved Nerds! I'm so glad you posted these!

I was the JAA biggest fan that didn't know them -- well my friend did work with MC Loaf for a while at the library.

Thanks for posting up the DEMO's I'm really excited the world has a chance to hear our idiotic music for once! I have so many crazy stories and dirt I could write a frickin' 400 page book. Those were some crazy times for us. With your permission I would love to share some with you on this blog. Keep on rockin'!