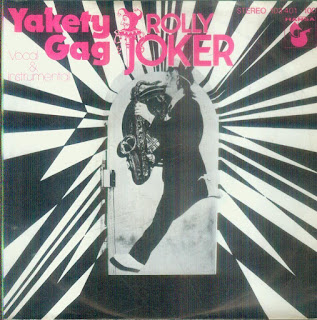 Rolly Joker was a German comedian/musician who recorded records in the old American style of "blue records" where the comedians told profane jokes that were not usually well-received in a polite society so they would record their stand-up acts in a small room (their own living room for example) filled with friends and family who agreed ahead of time to have exaggerated reactions to the jokes that they likely heard before.

The jokes on Rolly Jokers' records weren't so 'blue' that they couldn't be performed in clubs but he did a good job of adhering to the classic 'blue record' sound.

He did different styles of music but this is probably his only "ska" one (even though it's not really ska in the strictest sense).

He tells eight jokes throughout the song. They are in German but they translate well to English:

*It's a company party at a big company and the boss is telling a joke. Everybody laughs heartily out of politeness. Except colleague Meyer. Boss asks why aren't you laughing? Meyer: I don't need to, I'm leaving on the first.

*Two women meet at the health insurance institution.
"What are you doing here?"
"I am getting a sick note for my husband."
"Well, I get my husband's extended."
"What they do that here too?"
(Wordplay on husbands and things that get extended).

*A man stands in front of the mirror during his morning ablutions and admires his athletic body: 100kg dynamite. A slight turn to the left: 100kg dynamite. Yells his wife from the kitchen: But a really short fuse!
(A penis joke)

*The fortune teller says to her client: Young man, I got some good news and some bad news for you. Let's start with the good one: You were a good guy, you will get to heaven, in heaven you will become a great soccer player and will achieve lots of goals. Now the bad news: Your first game is tomorrow.

*During the wedding night the couple happily lays next to each other. Only the bride has a terrible flaw: really bad odour from her mouth. The groom has a terrible flaw too, really bad stinky feet.
The bride: "Darling, I got to tell you something..."
Groom: Yes, I already know, you ate one of my socks.

*Little Fritz comes home from school, crying. "Mommy, mommy, the other pupils are so mean to me. They always bully me and say I got gigantic feet."
Mother: "Oh darling, that is not true. Now put your shoes into the garage and come upstairs."

*Male driving instructor asks the female driving student:
"Miss Mueller, do you have the rules in your head?"
"Why, am I bleeding from my nose?"
(Word play: 'rules' is Regel, but Regel is also used as a word for menstruation.)

Posted by Tone and Wave at 4:08 PM No comments: 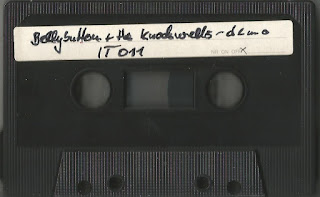 Just like the last post, this is strictly mod music. Not a second of ska anywhere on this tape. But don't worry - I am not moving in that direction. I am running out of quality ska music but there is still lots that I haven't posted yet. I have posted some mod stuff in the past. It's allowed.

As I'm sure you know Belly Button and the Knockwells' first actual release was for their ska song "I Left the Army". The B-side of that single is "When She's Around" which appears on this tape but it's a much different version. There are six songs on this demo and "When She's Around" is the only one that was released later.

"My Babe" is, of course, a cover of the Little Walter classic.

Posted by Tone and Wave at 3:50 PM No comments: 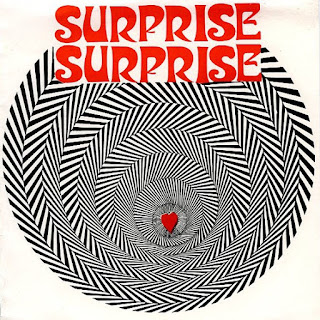 Surprise Surprise was a mod band from Australia that released three  singles that I know of. This is not ska but I am posting it because I used to have the other two which also were not ska but, for some reason, any time I saw this one for sale anywhere it always labeled it as ska. It was (and still is) relatively common for a mod/power pop band to do an occasional ska song so I was intrigued. Even though I no longer have the other two I broke down and bought this one expecting a ska song. Half of me was disappointed because there is no ska to be found from this band, but the other half of me was okay with it because the A-side is a good mod song.

A - Anguished Heart
B - Walking with a Zombie

Posted by Tone and Wave at 3:39 PM No comments: 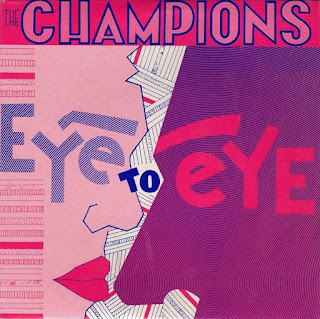 Posted by Tone and Wave at 3:28 PM No comments: 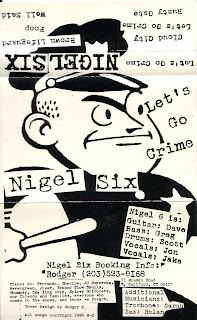 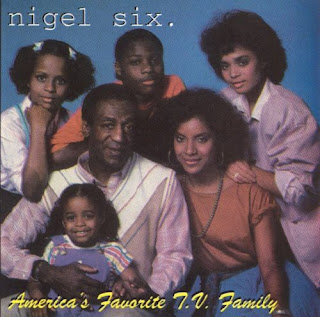 
Nigel Six was a punk band with a heavy ska influence from Connecticut. They released a demo tape and then these two recordings. The tape is more ska than the later offering.

Thanks to the Punk Guy YouTube channel who submitted the cassette for our approval. He has tons more punk and ska rarities on his channel.
If you have anything to do today I highly recommend that you DO NOT GO to his YouTube channel. It will hold you captive for a long time. The rest of your day's plans will become secondary.

Posted by Tone and Wave at 3:16 PM No comments: 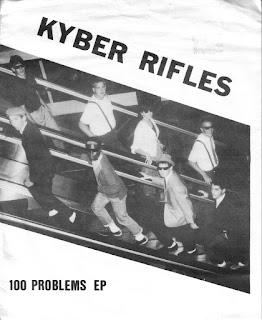 I cannot re-post this record because the band has made all four tracks available for download with lots of other songs that were recorded in 1984 and they sound much better than my rip of this record. 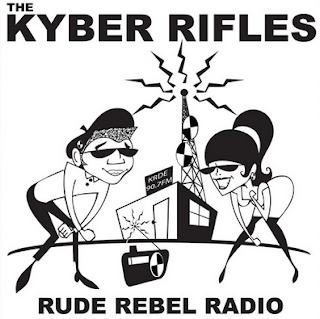 Rude Rebel Radio was just released in 2018 and it has 17 original recordings which includes the 4 songs from the EP and all of the songs that were on their old MySpace page.

It's available on CD Baby.


Iguana, if you're reading this, send me a private email. I won't post it on the blog but I can share it privately with friends. 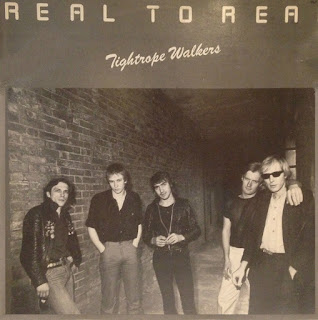 In February 2016 I posted Real to Real's 7" "White Man Reggae" single. I mentioned that Real To Real was a band that included Alan Wilder from Depeche Mode. I said that they only released three singles, but I was wrong. They also released this lone LP. It included every song from their singles except for the B-side from the "White Man Reggae" single "One of These Days". I have included that 7" with this download so everything they ever recorded is in this one file. 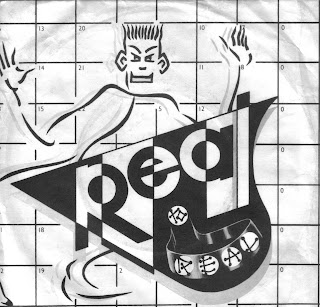 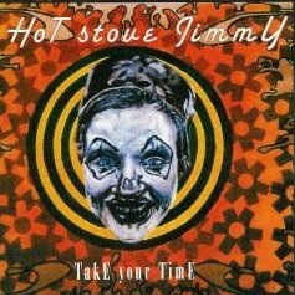 This is a CD release of their demo tape. They later released two albums. I was going to post them but I think they're still available for sale through Jump Up Records. 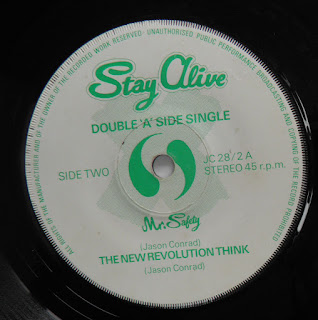 This was ahead of its time.

Jason Conrad was a musician/actor in Britain in the early 70s who witnessed a child being killed by a car. He became an advocate for safety and toured Britain warning children about the dangers of automobiles. He did this through a live stage show and through music.

At one point Frankie Laine (He sang the theme to Rawhide and had a hit with Jezebel but, on  an unrelated personal note, one of my favorite songs is his version of "The Cry of the Wild Goose") invited him to America to do his safety lectures leading to him moving to Florida where he founded the Children's Safety Foundation inc.

Read more about Jason Conrad and the Safety campaign HERE.

The reason I think this is a notable post is because the B-Side sounds like it was an effort to pass this safety message through the ska pop-culture sound that was happening at the time except that it was five years ahead of the time. Listen to "The New Revolution Think". Doesn't it sound like it was pandering to kids who liked Madness? But this was from 4 years before 2Tone.

A - Little Danny Jones
B - The New Revolution Think

Posted by Tone and Wave at 6:46 PM No comments: 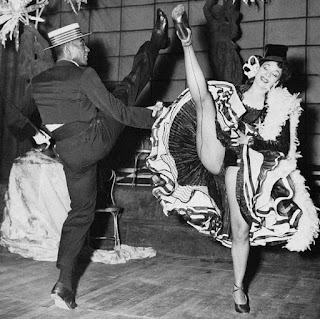 I try to get to these re-posts when I receive them - if I have time. But I never have time. My life now isn't what it was when I started the blog. But I'm not making excuses. I like sharing this incredible music and you actually want to hear it. It's not like back in the days when I used to make actual mix-tapes for friends and they never listened to them.

Most of you I got back to personally, but I ran out of steam. Here are the ones I didn't message personally.


The Frits - Die Erste (still missing that one track - I'll fix this one day. Give me another ten years.)

The Professionals (only their two ska singles. Maybe someday I'll collect their disco stuff but I have far too many things I want before I get to that)

Spy Eye (I have re-posted this many times. Where have you been?)

Zero Heroes (I re-posted this many times too but I agree, it needs to be re-posted again)

Hotpoints - Let it Rain (This has never been re-posted since the original post but it should be more noticed.)

Grunwaldt & Bley - Shout it Loud 12" (This is not ska at all but I love this band and I love this song. It was posted on a "Not Quite Ska" post but I'm glad somebody requested it again. This is great music!)