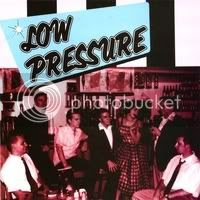 Some of you may remember Low Pressure from their minor hit "Child of Distinction" made 'famous' by the "Hey Brother Can You Spare Some Ska" comp in the midst of the 3rd wave heyday. If you ever liked that song and wondered what else this band had to offer - I'm afraid this is it. This album, which was released in limited numbers, recorded in 1997 contains all 9 songs the band ever recorded. (actually I do have another song from a live recording which the band said was untitled that I will eventually post (along with the rest of that show) if anybody is interested).
The lead vocals were handled by Jackie Ojeda who - if I'm not mistaken - now sings for the Long Beach California band Sexytime Explosion.

Some of you may find this a bit too poppy, but if you ever liked No Doubt or Save Ferris then this will be up your alley. There were a lot of bad bands in those days trying to play that 3rd wave sound but Low Pressure pulled it off nicely.

Sir, can you please update the link again i really like them after listen to "nowhere" track in Girls Go Ska compilation

Link isn't working! Hope you can fix it