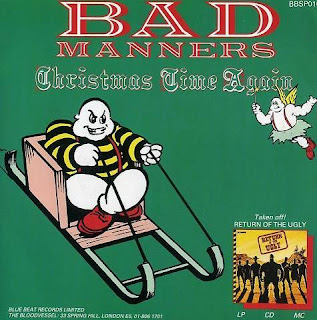 I don't know the story behind this one but it's Bad Manners on the A side doing Skinhead Love Affair with some yuletide lyrics that aren't so jolly. Our friend Buster has an accident and winds up in the hospital where he wakes up Christmas morning to find all his friends have gone and there are no presents for him. It has a happy ending though. Sort of. The lyrics come off as really forced.

According to the sleeve it was supposed to be on Return of the Ugly but it wasn't. The single was pressed before the album was but was excluded for some reason.

The B-side is Skinhead Love Affair by Buster's All Stars.

Not a great song but I totally forgot about the Smash Hits Happy Christmas from the Stars flexi that I was supposed to get this past year. Maybe next year.

Hey guys, I'm James from USA I'm fond of Computers and Natation. I work for a game translation company. Life here in Japan is great!