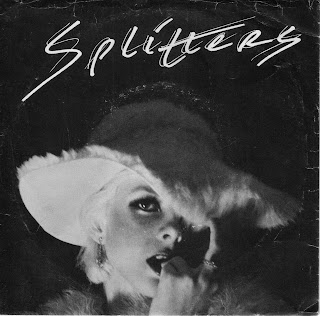 When I posted the RAM 7" I said that I considered that record to be in the top three of the rarest California ska records. I mentioned that I did not have the other two of the top three, but now I have them and I will be posting them here shortly.
The one I consider the absolute rarest (based on my own mission to find these gems) is by a band called The Corvairs. I have since acquired two singles by the Corvairs and, although I said in the RAM post that the rarest is not as good as good as the other two, I rescind that statement. Both of their singles are excellent.
The one I considered 'the third rarest' is a 4 song 7" by a band called Dutty Rass. I just got that one yesterday and I haven't actually listened to it yet.

The reason I'm saying all of this in this particular post is because this would be #4 on the list. I know nothing about this band except that the lead singer Dilithium Cristil (whose real name is Celena Allen) was invited to pose in Playboy in 1985 in an issue that featured 'The Women of Rock'. 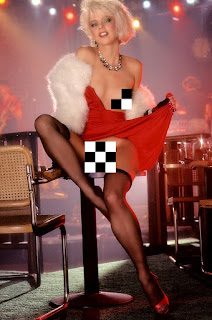 Aside from that I can't find any information about the band or any individual members. I don't know if they ever recorded anything else but I know this record is extremely difficult to track down and both songs are great. Neither track is straightforward ska but quintessential new wave with the B-side showing a 2 Tone influence.

Good stuff! Thanks, and congrats on picking this up!

I'm glad it's appreciated. I have so much stuff that has a ska influence but isn't really ska and I'm always a bit reluctant to post it because I'm not sure that the fans of this blog will appreciate them as much as I do.

Thanks for commenting! It made more of an impact than you realize.

Oh, it's definitely appreciated. I've noticed this isn't a very chatty blog but I'm sure your numbers show that we're checking it out. I love getting to hear this old stuff that I'd never be exposed to otherwise, even if it's only tangentially "ska."

You'll be happy to know that I have several records that I was not going to post but, since at least one person is interested, I will post them. I'll put several of them together in one download instead of stretching them out.

You're right about the numbers. The heyday of this blog was in 2010 when I got 1,000 views a day. Now it's down to about 400 with most of the views for old posts with expired links. I estimate that there are about 70 actual followers which, to me, is phenomenal.

I'd be doing it if I knew even one person was interested. It's like making a mixtape (a real mixtape like we used to do in the 80s) but more than one person can have the tape in the end. It never stopped being fun for me so I'm gonna keep it going.

Thanks so much for posting these tracks; I was a big fan of Splitters in LA in the early 80's. They did a fantastic live show (I saw them uncountable times) at the various dance clubs. The only club I really remember is Madame Wong's West, but Splitters played all over town.

Many of the songs were thematic, and Dilithium Cristal would come out in a costume to match. She was really good, but in my opinion the real star was the songwriting, by the lead guitarist (who's the male lead vocalist on these tunes). Don't know his name, real or otherwise.