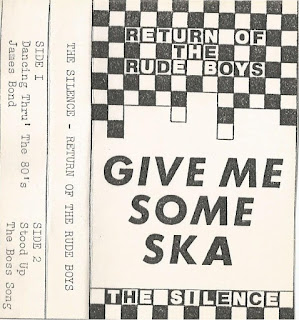 Remember in the late 90s/early 2000s when so many underground bands were naming themselves with the word "ska" as pun in their names? They used "Rude" and "Skank" in their song titles and everything they wore and owned had the black and white checkers but the actual ska beat was notably missing from their music.

This band pre-dates all of those bands by at least a generation.

Look at this cover. Look at the title. Look at the phrase "Give Me Some Ska". This has to be a ska band right? But it isn't.
You can tell that they are aiming for a ska beat but they really need some practice. The sound is very raw and amateur but there is something charming about their music, especially "The Boss Song".

This band was from Stoke. They recorded this demo at Star Trax Studios in October 1985.
The band consisted of
Dave (vocals/harmonica)
Benny (lead guitar)
Joker (bass/maracas)
Nick (drums/percussion)

Their debut show was at Chesterfield with The Threads in January 1986.