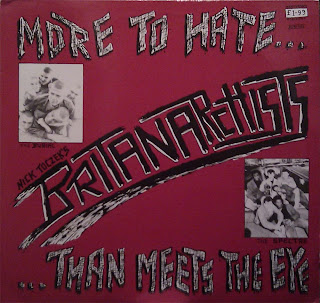 Nick Toczek of The Burial was involved in other projects including anarcho-punk poetry readings and at least two other bands Britanarchists and The Spectre which, like The Burial, were punk based with cowpunk and ska influences.

This download includes two tracks from The Oi! of Sex comp
The Burial - Old Man's Poison
The Burial - Friday Night

(Excessive thanks to Rikard for the Britanarchists 7"!!)


* The Intolerance Tape was a collection of spoken-word anarcho-rantings from 1987 with Nick Toczek, Seething Wells, Kevin Seisay, and Ginger John (the Doomsday Commando).
Not exactly my cup o' tea but if you'd like - it's HERE.
Posted by Tone and Wave at 4:54 PM

Great post, however Nick Toczek were never a member of either The Burial or The Spectre. These two bands were just backing him as The Britanarchists on the 12" inch you've posted and The Burial also backed him on the Oi! compilation track.
A funny sidestory involving Nick, Babyshambles and The Burials old labelmates Skin-Deep can be found at:
http://www.albionarks.com/wiki/Baddie's_Boogie

Fantastic stuff, thanks Tone and Wave (and Rikard, too)!

I had taped a copy of 3/4 of this EP from a radio interview Nick did when hes was over here in '87 on a Black Wedge tour. Good to hear the whole thing...

...and especially for the Intolerance Tape!

Hey! Great to be remembered. I'm now on wikipedia if anyone wants to fin d out what I've done since '87. Nick Toczek... still alive and kicking!

First off can the Intolerance Tape be re-uploaded? secondly anyway to still get it at all Nick Toczek?