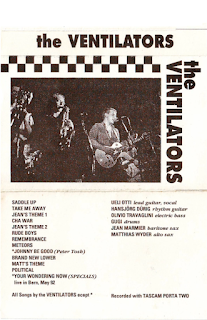 This is another tape that I do not own because nobody owns this one. It was never released. Thankfully a YouTube channel posted it and I respectfully stole it to share it with you. They also have the other Ventilators demo tape called"Ska" that I previously posted HERE and it has the correct titles. There were no titles listed on the tape or card so I had to guess and I got a couple wrong. I've been meaning to update the tracks on Discogs. That channel is called Radio Skamachine and they also have some other rare Ventilators live recordings.