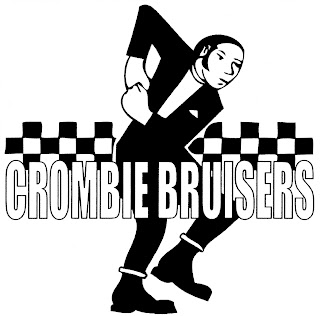 This is more contemporary than what I usually post. It's not from the tone nor the wave era but I'm posting it for two reasons:

This was a band from Denmark that had a respect for the 2Tone era as much as they did for traditional ska and reggae but their energy came from Oi! and punk. They didn't record much. In fact I think this is all they released. They may have recorded more but they didn't make it freely available, did they? I guess they liked playing live more than they liked being a studio band, which is just as well.

The reason I say that is because, if you've been following this blog for any length of time, you know I'm not big on bands recording cover songs. It's great to see them play a familiar tune live but if the band records it, well then, it better be pretty damn spectacular or we'll just listen to the original instead. And not play your music.

Thankfully Sugar Sugar is NOT a cover. It's not a bad song but the winner for me is the song Stitch.

Devotees of this blog might have noticed that I no longer allow comments, I have removed links to my email and social media, and I no longer do re-ups.

I have done this blog for over a decade and I have had the incredible opportunity to interact with so many of you and it solidified my notions that ska people are the greatest people in the world. We are the punks, the skinheads, the Rastas, the musicians, the jocks, the nerds, the liberals, the conservatives, we are vegans as well as those who can bar-b-q some pork ribs better than anybody else. We can watch Bugs Bunny one minute then follow it with a Shakespeare play. We are more knowledgeable about world events than most people but we never let ideologues divide us.

We love music. All different kinds of music. We are not racist. We are not sexist. Some of us have religious beliefs but we embrace our brothers and sisters who have different beliefs. We don't care who you're attracted to no matter their gender. We accept that there are people out there who actually don't like Star Wars. We see people supporting the opposing sports team as a comrade with bad taste, not somebody to hate.

Unfortunately people who did not feel this way took advantage of my email address being on this blog. I was called all kinds of horrible things and some people made it clear that they knew everything about me. The names of my family members, where I worked, where I live. Veiled threats.

Someone even started a YouTube account using my name that they used to start problems with other people.

They got very aggressive and it went on for over a year. I initially decided to shut everything down. No more blog. No more social media. In the end I decided against it. I'll still keep posting but it's one sided now. That sucks for me because I liked hearing from you guys. I learned so much from you guys, not to mention all of the great music that you guys shared with me that I posted on the blog to share with other people.

It was a real community. But a few people with their own selfish agenda had to ruin it.

I wonder what they got out of it.

I will try to re-post things but the truth is my account on MEGA is nearly topped-out. If I want to keep posting new things I have to limit any re-posts.

Not only that, but for many years I got people saying "Hey, can you re-post this one thing?" which I had no problem doing but recently I got "Hey, can you re-post this list of 32 things?". People stopped asking for one thing here and one thing there. In the end people were seriously requesting that I re-do more than half of everything that I posted on this blog in the last 13 years. It took 13 years the first time. I can't do it again.

I would like to though. If I had the ability I would make sure that everything I have ever posted on this blog remains consistently available. That's just not realistic.

The things I posted in the past were downloaded by hundreds of people. They are available somewhere, you just have to find out where. If you're serious about collecting this music you should be part of forums and social media groups (NOT Reddit/Ska - that's a wasteland that upvotes the living shit out of a post of a checkered belt but cares very little for actual ska music). It's out there. Find it.

Anyway, (you're still reading?....really? ...why?) I have a lot more rare ska to post. I have demo tapes from The Riffs, No Sports, and more. Lots of records from the 80s (but believe me when I say this...I have already posted the good stuff. I have lots and lots of "ska" and "reggae" records that are very rare but not necessarily very good, - don't get me wrong, I have some really good stuff too), and lots of CDs from the 90s that I can't find anywhere else online.

In my personal and work life I am more busy now than I have ever been so the posts won't be as regular, but there is lots, lots more to come! Keep checking back.

There is a very famous female singer who released several blues/soul/pop albums over the last few decades but she started out in a ska band in the early 80s. The first incarnation of the band released a full length 11-track demo tape in 1981 and every track was ska but then they changed their name and put out a 4-track demo tape in 1982 under their new name and, again, all tracks were ska. But they went on to release several singles from 1983 through 1987 and the early singles were ska/calypso but they moved more in a pop direction as the years went by.

I have everything this band released including all demos and vinyl singles up to their last single in 1986 - but then, in 2013, they released a vinyl 7" that had one song from the second demo as the A-side and an unreleased song as the B-side.

I do not have this single.

I have sent messages to everybody on Discogs who said they have this single and I offered all kinds of things. Money, rarities in their wantlist, etc. but none of them got back to me.

I think I'll just post everything I have with the hopes that somebody out there will be able to mend the sore spot in this collection.

Can you guess what band I'm talking about?