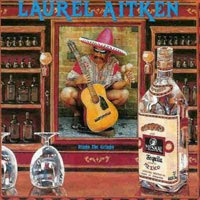 This is the 1990 cd version of the Unicorn Records 12" release from 1989. The vinyl version had only 10 tracks. You can tell this is the cd version because the lettering on the cover is blue whereas on the LP it's white. I apologize for the cover pic. I actually have a really good scan somewhere but I can't find it. You will have to suffer with this one.

His backing band this time around is The Pressure Tenants.
This is a bit different from the sound that Laurel Aitken is recognized for. Noticeably eighties.

(Though it's nothing like the single he wrote and produced for Sugar Candy in 1975. It was bubblegum pop called "Mummy, I Want to go to the Disco / You Only You" put out by EMI which I would post for novelty's sake if I had it. I have heard it before - and that's why I don't have it.)


1 I Love You, Yes I Do
2 Lookin' In the Mirror
3 Night Train to Tokyo
4 Don't Turn Your Back
5 Rock With You Tonight
6 Ringo the Gringo
7 Peggy Sue
8 Going Back to the Frontline
9 Rude Boy Dream
10 Hitchike
11 Hey Little Girl
12 Sally Brown
13 Since You Went Away
14 Je t'aimerai Toujours
15 Eh Mon Amour